1/18/1967
At midnight a flash in the sky was noted shortly before a power outage in Williamstown, Massachusetts . Fifteen minutes later a lighted reddish orange domed disc was sighted on the opposite bank of the Green River by four witnesses. When they drove in get help a red glowing object buzzed their car. Electromagnetic effects were noted. (Source http://thecid.com/ufo/index.html ) 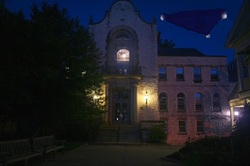 Recreation of Sighting
1996
A dark triangle with three points of light at each corner was seen by three technicians at the observatory at Williams College. According to one technician, who filed the report anonymously, the lights never blinked but remained at a constant brightness. The triangular formation moved slowly across the sky, taking about five to seven minutes to cross their field of vision. (Source www.Advocate.com)

2003
Another flying triangle was sighted over Williams by three students. It was described as long and narrow, with a sort of haze around it, through which three points of light could be seen. This triangle also moved slowly, but in an odd pattern that, to the witnesses who saw it, precluded the possibility of it being an airplane of any kind.
(Source www.Advocate.com)