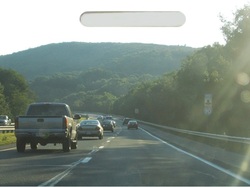 6/30/1993
At the time of this sighting in 1993, I held an extremely high profile job in law enforcement, and said nothing about it to anyone, however, it has stayed with me all these years. Since it occurred on the Massachusetts Turnpike in full view of hundreds if not thousands of cars, I decided I would post it here, in case someone else might have seen more of it. I was driving Eastbound toward New York, late in the afternoon, when I came over a hill and noticed directly in front of me, in a clear sky what seemed to be an immense and dense white cloud-like thing, that was perfectly formed into a rectangle reminiscent of a white piano key. Its edges were perfectly formed and it seemed to be low in the sky and perhaps as much as a thousand feet in length. It remained perfectly motionless and radically unnatural in a cloudless, clear blue sky. As I drove toward it in heavy traffic I debated pulling onto the shoulder of the road to take a photo. The road dipped into a valley and the object was hidden by trees. Determined to take a photo the moment I caught sight of it again, I raced the car forward. By the time I reached the next hilltop, the sky was perfectly clear. I never saw it again, nor have I ever seen anything like it at any time in my life. As I said, the memory stays with me, along with a great regret for not having stopped my car immediately and taken a photo. (Source NUFORC.org)