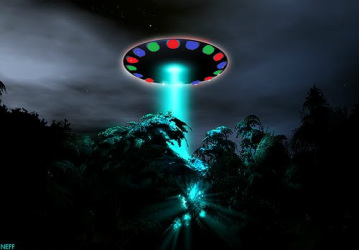 Recreation of event
KINGSTON
Summer of 1974,
Me and a childhood friend were at the local baseball field at around 9:00 pm in Kingston, Ma. This night was clear but dark, not much of a moon.  The area is nestled in the woods surrounded by trees and sparsely populated. As we started walking we got about to the pitchers mound when the sky in front of us flashed red. The flash was not like a lingering flash; it was extremely quick and seemed to span the horizon. My friend said” did you see that”. It was very strange, and the color was vivid.  As we continued walking east, I noticed an object about 20’ on the horizon coming from our 11:00 position.  It had red, blue and green lights in a circular pattern that were spinning. It looked like nothing I had ever seen.

As we watched it came closer, it was at our 9:00 position  it seemed to be flying along the railroad tracks when it suddenly stopped. I Knew it was not a helicopter because it made no sound and no aircraft looked like this. At this time it began coming toward us. I would say around 10 mph maybe. I could see it looked like two saucers facing each other with the lights spinning in between. It seemed to have no color that I can recall. It was about 100 feet away from us when it again stopped and a beam of light hit the ground. The beam had a sort of bright bluish tinge. The beam of light started to scan the ground, up back left and right. I told my friend not to move or it will see us. The object was around 100 feet high or so, it was hard to tell. The beam then went off and the object proceeded to move about 50 feet to our right and did the same thing with the beam again the beam went off. Now the object moved closer,  just above our heads and again the light hit within 10 or 15 feet away and I heard my friend start to whimper. The light came to a point so close that I felt I could touch it, then nothing the light was gone the object was gone with no sound. We never saw it leave although I was looking at the light on the ground moving around because I didn’t want it to see us so I never actually saw it vanish, but it was gone in a second. We both ran to my house five minutes away and told my younger brother and mother what happened. Naturally my brother wanted to go see so we went back. The three of us walked down a steep hill, it’s a road about 200 yards to the ball field. Once there we saw nothing then we only walked out maybe 25 feet and the beam landed right in front of us. We all ran, my brother got to the top of the hill first and I heard a car skidding down the road, it nearly hit him as he ran across the street.  We never saw any sign of it ever again. My friend and I went down to the ball field many nights after that just hoping to see it again, but I can never forget what I saw.(Source NUFORC.org)