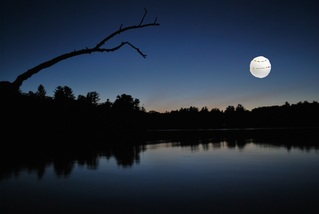 4/7/1981
Two 15 year old girls, Penny Ferraro and Mitchell Perrault were playing cards in the Ferraro home around 9:30pm when they noticed a bright light over the lake. When they went outside to look, they saw a round object with lights on the top and middle moving upward at a sharp angle and at a high rate of speed. The object was ringed with lights and had an extremely bright white dome. It had no wings, tail or flashing lights, and moved silently, passing over the house from behind the tallest pine tree on the other side of the lake in seconds. The girls called to the others in the house, but by the time they arrived the object was far overhead and climbing rapidly. (Source APRO Bulletin Vol 29 No 8)