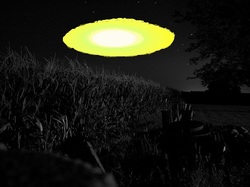 Recreation of event
LAKEVILLE
February 28 , 1961
The UFO was sighted about 3:20AM by Mr and Mrs. Clarence Blackwood. They heard a roaring noise in the sky and they looked out the window and observed an eerie elongated object. The object was bright yellow with a dark red edge and surrounded by "black smoke" which was visible low in the northeast sky. the UFO was rolling back and forth rapidly and moving slowly towards the southwest. As it passed over the house the bedroom was illuminated like daylight. The lights which had been left on in the kitchen dimmed and then went out. The Blackwoods rushed to the south window and watched the object continue on its course. It was visible about 5 minutes. After it passed the the house lights came on again. A few minutes later, they hurried outside and saw the object make a second pass. the house lights again dimmed and the couple detected an odor similar to "fat burning" as the UFO passed overhead the second time (Source NICAP.ORG)

Dawn, Fall 2001
I had just dropped off my brother to his place of employment and was headed back home with my nephew in the car. I was on Rt 105 in Lakeville and was right across from Elliot Farm. There is a wide open field that runs right along the road at this point of Rt 105. We both saw a bright light over the field and pulled to the side of the road to get a better look at this object. Then about three other cars pulled over behind our car to observe this unusual craft. Once we stopped we could see an intensely bright yellow light. It was about as large as a school bus and oval in shape. There was no noise coming from this object at all and it just hovered over the field. The object stayed in the position for about 10 minutes and then just vanished. I am not sure if it just blinked out, or shut its lights off, or took off so fast that we could not see it leave.(Source Story Submitted to this website)